Paris, 18 February 2020 – The Game Shakers Awards announces the names of this year’s winners, who received their awards at last week’s ceremony, opened by Ambassador and Shaking Up Initiative Award recipient, NBA star and entrepreneur, Tony Parker. 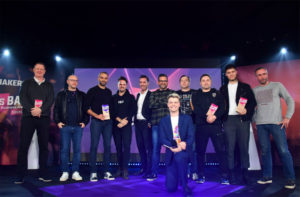 The Game Shakers Awards, now in its 3rd edition, is an integral part of the Esports BAR Cannes event, the global business arena for esports, at the Palais des Festivals in Cannes. The awards celebrate the work of individuals and organisations, both endemic and non-endemic to the world of esports, for their outstanding contribution to the global mainstream success of the sector.

This year’s event, hosted by Trevor “Quickshot” Henry, (shoutcaster for League of Legends at Riot Games), was attended by international guests and delegates who were addressed by NaDeSHot (CEO, 100 Thieves) via a heartfelt video message to express his happiness at winning the prestigious Shaker of the Year Award. Stars of the esports world, including Laure Valée (host of League of Legends Worlds 2019, international esports journalist and consultant at BeIn Esports) and Yuli (LEC referee and Twitch streamer) presented the awards, with the ceremony streamed live on Twitch, Ginx Esports TV, Jovem Pan and BBL, and in replay on ES1.

At the ceremony, Awards Ambassador, NBA star, Tony Parker, highlighted the importance of education in esports and congratulated the award winners, saying, “I want to congratulate all the winners on their incredible achievements. It’s been a privilege to be named as Awards Ambassador as the work of the Game Shakers is so aligned with my own passion for education in esports. We have to aspire to be the best in our field and that’s what education can provide.” Parker was honoured at the event, including the founding of his Tony Parker Adéquat Academy, with a Shaking Up Initiative special recognition award for his work in promoting education in esports.

Esports BAR Director, Arnaud Verlhac, said, “Esports is a strand of entertainment that has exploded and continues to boom, so it’s an exciting time for the industry and these awards. Individuals and organisations like those winning the Game Shakers Awards are doing fantastic work in bringing the sector into the mainstream. We look forward to growing The Game Shakers again next year.”

The Game Shakers Awards is a co-production between Esports BAR Cannes and Rafe Productions. It is presented in partnership with GamesBeat, Gamesindustry.biz, Ginx, Jovem Pan, La Chaine Esport, Millenium, Twitch and VentureBeat.